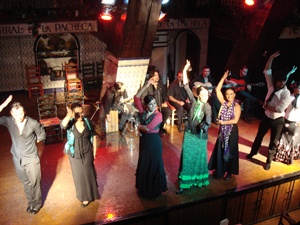 Corral de la Pacheca is obviously built for visitors (i.e. tourist), has a very large indoor space, and houses overhanging second-level above. The views are great from up there, easy to see the very large stage. It’s all located near the Plaza Castilla and in a very nice neighborhood. Meals are served but we were there for just the show and the free-drink included. The show was good and included a large “cast”. One of the dancers really impressed us and imagine she’ll be famous someday soon – certainly she’s well known already. I also heard this place, Corral de la Pacheca, was the location for a weekly 1980s program on Madrid television where they  hosted different flamenco singers, many of already famous – or would-be famous. The clientèle was totally non-Spanish. 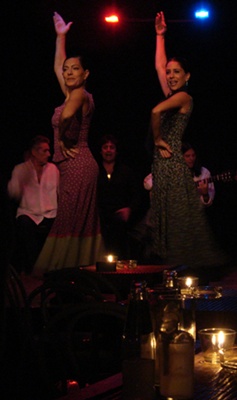 Las Tablas is well-located near the Plaza Espa&#241;a on the second level of the building facing the Cuesta de San Vicente. To enter you must go around the back and up the stairs. The owners, Antonia (left in photo) y Marisol (right in photo), were also the dancers when the show started. They were both very obviously technicians in their art and we enjoyed watching the show. The stage is smaller, lower, and a bit more difficult to see the feet of the dancers. We were also very impressed with the singers. No smoking was allowed during the performance and no flash was allowed for photos either – making photo-taking nearly impossible. Still, the show was good and the price was cheaper (22€) than any flamenco tablao I’d visited. The place is smaller than most and does not have the typical rustic “tablao” look but I was told by one of the owners that the space is also used for theater, photo expositions, and other artistic events so this is why they decided to go with a more neutral decor. There’s no kitchen so food cannot be ordered – which is probably why the entry prices are cheaper – but one drink is included in the entry price. The clientèle was mainly Spanish.

What a last week it’s been for me. The more things like this I do the more I feel I’m becoming SPANISH! But surely no Spaniards live like me! 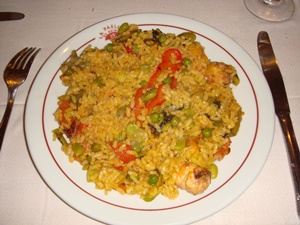 So first I go to Corral de la Pacheca on a Friday night (14 Sept.). Monday (17 Sept.) I go for a good Paella Valenciana lunch at Restaurante La Paella de la Reina (see photo at right), then after-lunch drinks in the Plaza de Chueca. Wednesday I get together with the guys for the movie, drinks on a terraza afterwards, and then dinner on the Plaza Mayor! Friday I’m downtown again taking late-afternoon and evening photos of the city, later getting together with friends for a tapas dinner near Puerta del Sol. Last Saturday night I’m having jamón serrano, lomo, y queso at a nearby bar before the flamenco show at Las Tablas. Sunday I’m at the bullfights in Las Ventas. After that we have rabo de toro (bull’s tail stew) and chopitos (very small, fried squid) at a nearby bar/restaurant while watching a Real Madrid game on TV, getting home at 1am. 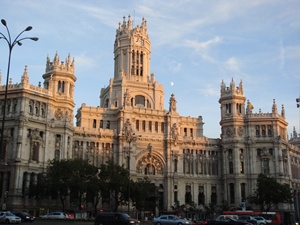 Is this the true “Spanish Life”? Doubt it. But I’m enjoying it nonetheless.