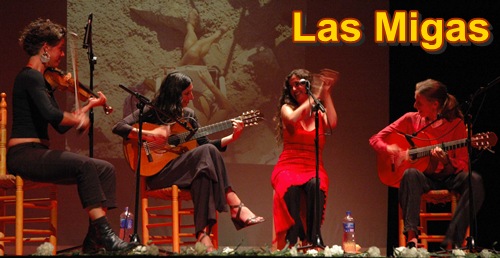 Last Wednesday I was very happy to watch the Barcelona-based Las Migas perform in the beautiful, 130 year old Teatro Lara in Madrid. There’s is a kind of flamenco fusion, fused with folk music and songs, many of which performed contained lyrics by Spanish poet Federico Garcia Lorca.

The band is made up of 4 women; one Catalana (singer: Silvia Pérez Crúz), one Sevillana (guitar: Marta Robles), one French (guitar: Isabelle Laudenbach), and one German (violin: Lisa Bause). Singer, Pérez Crúz, while being absolutely beautiful, has a perfectly pure voice. They were accompanied by a male percussionist through much of the concert as well.

Their songs were soulful, mid-to-slow-tempo, all sweet in sound and lyrics, and the audience could sense their enjoyment in performing for the 2009 Suma Flamenca flamenco festival in Madrid – my last flamenco performance of the festival. They’d also recently performed for Barcelona’s Flamenco Festival a few months earlier. 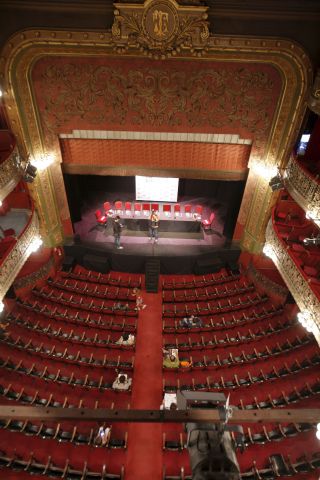 The concert was very enjoyable, not all that passionate, rather quiet
and soft. Very pleasant. But as I stated above, their joy in performing
was obvious, Silvia Pérez Crúz, the lead singer, was smiling nearly the
entire time and exchange casual banter with the audience between songs.
The other performers also smiled at the audience and with each other
throughout the musical numbers, offering the occasional nod and chuckle
when making eye-contact with their fellow band members. The addition of
the violin – by Lisa Bause – was a nice touch. All songs sung during
the concert were in Castellano – although many of their recordings are
done in Catalán.

The theater, Teatro Lara, only seats 400 persons on the floor and 3 more balcony levels – each of which is circular and hugging the theater’s wall from stage corner to stage corner. The floor seats, all upholstered in an aged black leather, were about two-thirds occupied and the balcony seats were about half-occupied. Our seats were excellent, on the first balcony and very near the left-hand side of the stage for a good perspective. This balcony was reserved exclusively to press and many photographers were snapping photos and cameras from TVE and TeleMadrid were making their recordings as well.