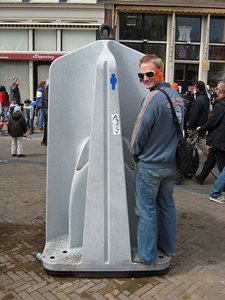 I realize I’m risking offending some Spaniards (and maybe I’m actually offending EVERYONE!) for writing today’s blog entry. No one wants to appear “uncouth“. But that fact is, SOME PEOPLE DO PEE IN PUBLIC.

Surely it happens throughout the world – even in the USA. And when “nature calls” you’ve got to answer that call. Sometimes there are no public restrooms or bars to relieve oneself. But come on, people! Make SOME effort to find someplace!

Don’t think that everyone is pissing on the street in Madrid just because of what I’m writing now because they don’t. I’ve been living here long enough to see many many things, things which I try not to judge but sometimes it’s hard.

PHOTO AT RIGHT: a highly portable and very public urinal in Amsterdam as found on this flicker page. If you look closely (but not TOO closely) you can see the pee level is nearly at the spilling point!  This is an example of a truly advanced civilization – or is it?

Yesterday I was walking home from the gym along a busy 4-lane road and happen to see an odd sight. There was a taxi parked on the street next to a wooded park. About 5 yards from the taxi was presumably the taxi driver. There he was in all his splendor, standing behind (only) hip-high bushes, facing away from traffic, with his hands on his hips. He was just standing there, apparently surveying the landscape. “Hmmm.. That’s odd,” I thought. And then it hit me. The taxi driver turned to look at me for a good 2 seconds until I turned my head away. About 2 seconds later I turned back to see his eyes diverted “downward”, his hands came off his hips to attend to “the business at hand”, his knees bent, his hips shifted, and he was walking back towards his taxi. He certainly didn’t seem to try to hide himself much. There were plenty of trees behind which he could’ve stood – or maybe the trees were too narrow. Sure, there were no bars in the IMMEDIATE vicinity but come on!

Another day, also in daylight here in Madrid, I was a passenger in a car. I noticed a large, tall truck pulled to the side of the street, door open, and could only see a pair of legs below the door with feet planted firmly on the asphalt below. I worried that a passing car might hit the door and injure the man – that’s what first caught my attention. But as we drew closer I could see a faint stream of liquid coming from behind the door. AHA! But again, COME ON!

One night last summer, maybe at 2am or so, I heard some loud voices on the street below my window (I live on the fourth floor – that’s the FIFTH floor in USA terms) so I poked my head out to see what was going on. It was just a small group of youths in their 20s, presumably coming back from a night on the town. Then one of the girls looked left, then right, then said something to her girlfriend with a giggle and walked a few meters away from the group, squatted down behind a parked car – and there she went – and went and went. This took place on a somewhat steep grade so imagine how the sparkling liquid appeared under the streetlights as it traveled downhill. Nice. (UGH!)

The worst is being around ANY football/soccer stadium just before the match gets started. On more than one occasion I was walking beside the Vicente Calderon soccer stadium (home to the Atlético de Madrid team) along the Manzanares River about an hour or two before game time. There were the usual hoards of football fans, all wearing their colors, all drinking from 1 Liter bottles of beer, all singing football songs and joking around. And, of course, a few dozen men and boys facing the wall and answer that call of nature. Why? Mainly because there are no public urinals or toilets outside of the stadium and it’s frowned upon to enter bars just to use the restroom. So imagine the scene, I’m walking past a few dozen men, just inches from their backs, and trying to avoid the puddles surrounding their feet on the sidewalk. Nice. (BLAH!) I made some comment regarding my surprise and disgust to a couple Spaniards with whom I was walking and they seemed surprised that such a thing upset me, saying something like, “Well, when you’ve gotta go, you’ve gotta go.” 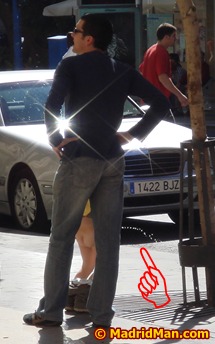 And probably half a dozen times I’ve seen small boys and even girls, usually toddlers, with their pants down around their ankles, bare bottoms – AND FRONTS – exposed to the world, happily releasing nature’s fluid against a tree, next to trash cans, between parked cars, or on walls – right in downtown Madrid in plain daylight with pedestrians and cars passing all the while. Their parents don’t usually appear uncomfortable but sometimes they do. I, not being a father, don’t really know what it’s like having a child who has to pee RIGHT NOW! I also imagine that most people see this and don’t think anything of it. In fact, it’s rather cute in some respects, but it’s not something you see where I come from.

Pissing in public puts people’s personalities in plain perception. (or something like that)

Share THIS on Facebook!
This entry was posted in About Spain, Environment, General and tagged peeing, peeing in public, pissing, pissing in public, public peeing, public pissing, urinal. Bookmark the permalink.

2 Responses to Peeing in Public